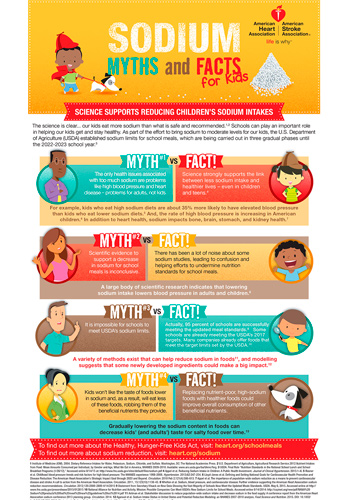 Our new infographic gives you the facts about sodium for kids.

We know that science supports reducing children’s sodium intakes. Our new infographic dispels some common myths, and explains the real facts, about sodium for kids. Check it out, and share with your friends!

Here are four common myths, along with facts that explain the truth about sodium and kids:

The only health issues associated with too much sodium are problems like high blood pressure and heart disease – problems for adults, not kids.

Scientific evidence to support a decrease in sodium for school meals is inconclusive.

There has been a lot of noise about some sodium studies, leading to confusion and helping efforts to undermine nutrition standards for school meals.

Actually, 95 percent of schools are successfully meeting the updated meal standards. Some schools are already meeting the USDA’s 2017 targets. Many companies already offer foods that meet the target limits set by the USDA.

A variety of methods exist that can help reduce sodium in foods, and modelling suggests that some newly developed ingredients could make a big impact.

Kids won’t like the taste of foods lower in sodium and, as a result, will eat less of these foods, robbing them of the beneficial nutrients they provide.

Gradually lowering the sodium content in foods can decrease kids’ (and adults’) taste for salty food over time.

To find out more about the Healthy, Hunger-Free Kids Act, visit: www.heart.org/schoolmeals